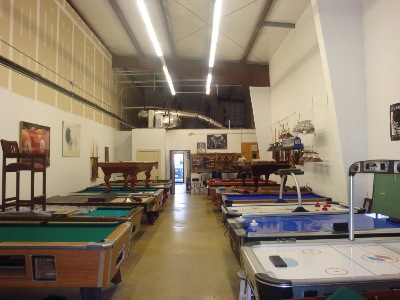 Hi and Welcome to Somar Billiards. Since 2004 we have provided San Antonio and South Texas New and Used Pool Tables, unsurpassed Service Work and Quality Accessories. Our website will inform you in the process of Purchasing a Pool Table weather it is a new or a used one.  We will also educate you in the History of Billiards and show you different styles of pool tables.  We sell brand new pool tables by C.L. Bailey, Imperial and a variety of used ones made by different manufacturers from coin operated ones  to furniture style ones,  as well as domestic ones to imported ones.  We are a one stop shop here to take care of all of your billiards needs.

The game is set to have been created in the early 15th century in Northern Europe. The word "Billiard" is set to have been derived from the French word "bille" or ball. The game derived as an outdoor lawn game from one similar to Croquett and was mostly played by royal and high society individuals that were mostly men. Players would strike the "bille" or ball with a wooden stick with a head at the end of it called a "mace". Later on, in the 15th century the game was brought indoors and more rules and changes were brought about. The game was now played on a table with green cloth to resemble the grass on the playing field. The "mace" was flipped upside down and the tip of the stick or the "cue" was now used to strike the balls. The balls also changed from wooden to Ivory.

As time progressed, the game was brought to a rectangular, green, wooden, playing surface that was equipped with border walls to keep the balls from flying off the pool table. These walls were later changed to resemble river banks and players would bounce the balls off them to create the "Bank Shot.

The game evolved and grew with most of its popularity saying to have spread through northern Europe and neighboring countries, but mostly in England during the Industrial Revolution in the early 1800's.  Chalk was created to cause more friction between the ball and the pool stick, which caused more spin or "English" on the ball.  Many modern and popular games have derived from the Eastern European sport such as: Cushion Billiards,  Straight Pool, One Pocket, Cut throat, 6, 8, 9, and 10 ball.

Location
We are Conveniently located on the North East  side of town on FM 78, between Randolph Air Force Base and Fort Sam Houston. If you have any questions concerning our location, please contact us and we can give you driving directions from your location.